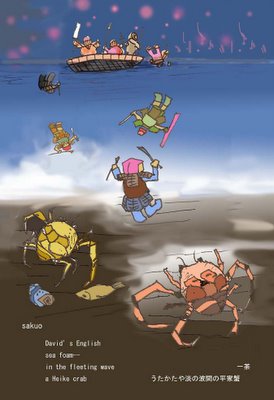 David's Comment
Crabs with special markings resembling faces of samurai are thought to be reincarnated heroes who died in a famous battle, recounted in the medievalTale of the Heike.

sakuo's Comment
Heike's enemy is Genji. [ awa no] is translated as [sea foam]
I think [awa no] means [Awa no Kuni, 阿波の国]at the same time.

at the bottom of seastares at enemy Genji
Posted by Unknown at 7:35 PM

awesome. as always, i enjoyed the illustration, verse and information.