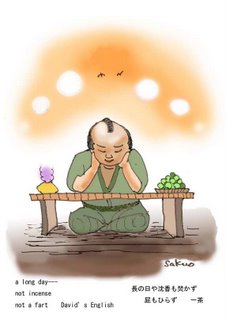 David’s English
a long day---
not incense
not a fart

Sakuo Renku
終日何もする事も無し
all day long
nothing to do
Posted by Unknown at 2:12 AM 3 comments:

Happy and not Happy ! 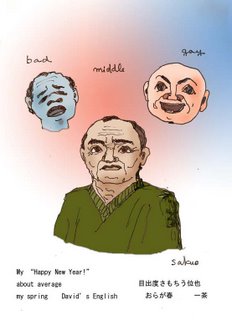 David’s English
my “Happy new Year!”
about average…
my spring

Comment
We have such proverb.
目出度くもあり目出度くもなし
Also happily it is and also happily nothing
Posted by Unknown at 5:54 PM 1 comment: 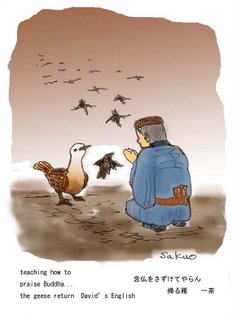 David’s English
teaching how to
praise Buddha…
the geese return

Sakuo Renku
念仏唱えて春にもどれや
praying to Amida Buddha
come back in spring
Posted by Unknown at 6:04 PM No comments:

All leave it to the Buddha 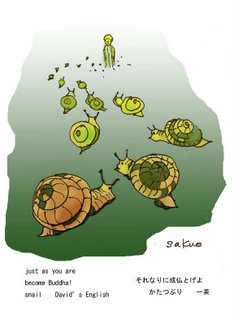 David’s English
just as you are
become Buddha!
snail

Sakuo Renku
生きるも死ぬも仏にお任せ
also living also dying
all leaves to the Buddha
Posted by Unknown at 4:53 PM No comments: 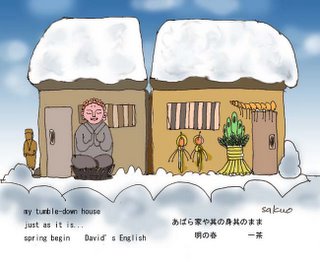 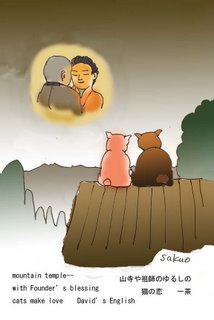 Comment
The Founder is the Saint, Shinran.
The rule which says that a priest does not get married was broken and he got married those days.
He has proved personally that ordinary people were saved by the Buddha.
Posted by Unknown at 12:09 AM No comments: 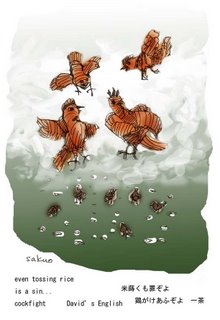 David’s English
even tossing rice
is a sin…
cockfight!

Sakuo Renku
身内は敵に何時でも変わる
Relatives change to an enemy always.
Posted by Unknown at 8:23 PM No comments: 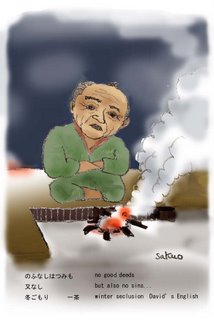 Comment
The man who is low ability and less activity does not
good things as well as bad things.
In winter seclusion all living things become inactive.
Neither murder nor theft nor a quarrel occurs.

Bow and Pray through plum blossoms 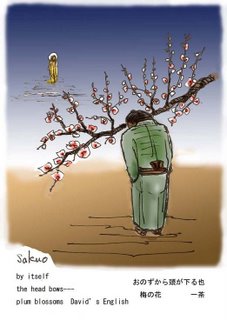 David’s English
by itself
the head bows…
plum blossoms!

Comment
There is the third existence in this haiku who is Buddha.
Issa bows and pray Buddha through the divine blossoms.
Posted by Unknown at 5:34 PM No comments:

To be as it be 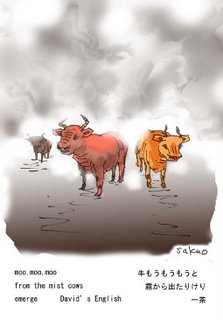 Comment
the haiku is so simple that seems to be describing only
autumn mist.
But I think that, the mist is bewilderment of human being, and
cow is Issa himself or ourselves who move like cows slowly,
it means to be not clever.
Betrayed men can get enlightenment naturally, like as in this haiku
the cows emerge from the mist.
"To be as it be”
Posted by Unknown at 11:31 AM 2 comments:

trusting in the Buddha 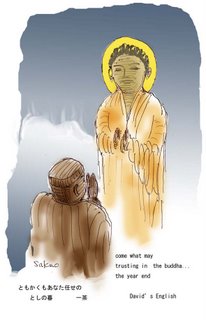 Comment
The death of his wife and 4 children, divorce, inherit struggle,
painful life in Edo, early die of his mother, separation of dearest
grand mother and farther,  etc…
Many tragedies have attacked him, but potentially he was keeping
a light heart.
Why he could do it?
He trusted in the Buddha. 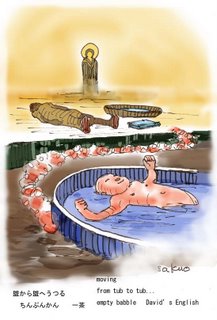 Cmment
This is said to be Issa’s last haiku.
[chinpunkan] is curious word. It means
[not understandable ] or [don’t know]
The first tub is a tub for baby that means birth.
The second tub is used for wash the body of the dead.
There is our whole life between two tubs.
He may wished to say
his whole life is not well understandable.
Posted by Unknown at 4:52 PM 1 comment: 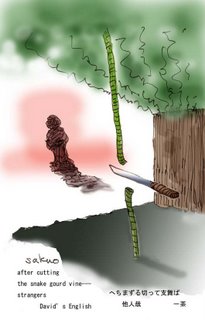 Sakuo Comment.
He and his second wife did not like each other.
The Divorce has come soon after marriage
Posted by Unknown at 9:32 PM No comments: 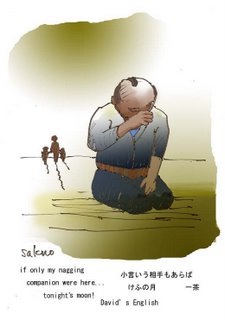 David’s English
if only my nagging
companion were here…
tonight’s moon!

Sakuo Comment
Issa lost the dearest wife Kiku, here he said that she was my
nagging companion, but he used a term of nagging companion
as loving her.
Posted by Unknown at 7:04 PM No comments: 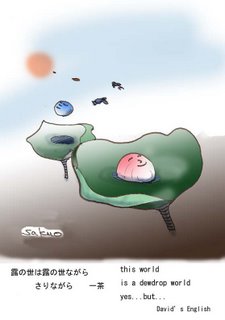 Sakuo Comment
At this time, Issa has lost two his children.
The first son died after 27 days of his birth. The first daughter, Sato,
died after a year and a month of her birth.
Issa prefaced  only “Grieving “ at his haiku.
Posted by Unknown at 2:10 PM No comments: 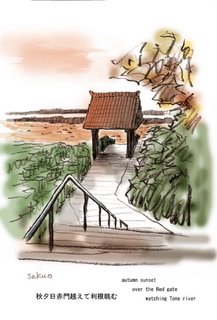 On 04th November I visited Tone-mati where once
Issa frequently visited for haiku meeting.
The town is along the Tone River.

There are many monument of Issa in the town.
One of them is Haiku memorial stone that stand
at the gate of the Temple Raiken-Ji that was authorized to paint Red Color at gate.
Red color painted on gate was monopolized by the Great Tycoon.

Issa’s haiku at the red gate.

After seeing the Issa’s haiku stone, I went up to the altar that is higer than the red gate.
I could look over wider view from the place. 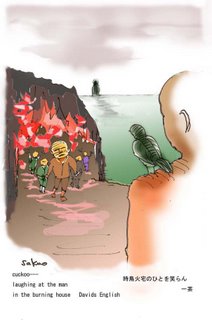 David’s English
cuckoo---
laughing at the man
in the burning house?

Sakuo Comment
In this haiku, Issa was cuckoo and himself who
watch the man in the burning house who has lived
with all his effort.
The man lives with out knowing his future’s death
and desires all happiness on the earth.
Such a man is called “a man in burning house”

The man, Issa and cuckoo, they are all same to be die.
So only praying Amida can help them forever. 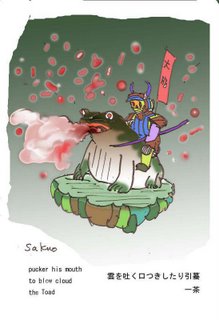 Sakuo’s English
pucker his mouth
to blow cloud
the Toad

It has extended my experience on Haiku making.
And I could have confidence in my way of feeling Issa’s image.
Posted by Unknown at 9:05 PM No comments: 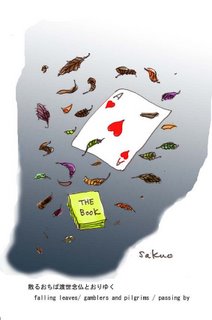 If you wish to find Issa’s visiting town, you should search above 4points in common.
Posted by Unknown at 9:00 PM No comments: 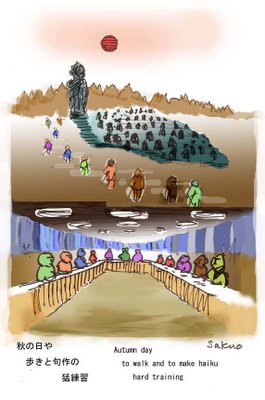 Hard training Day.
In day time we had to walk broad and up, down Temple by foot.
All members average age is 74 years old, so it was hard work.
In night we had two hours haiku excise by teacher of NHK Culuture School.

Then haiga and haiku were born as the above.
Posted by Unknown at 9:41 PM No comments: 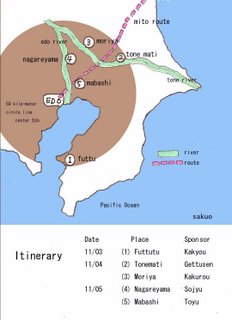 I will travel to the satellite towns of Edo ( now Tokyo)
on 3, 4, 5,of November.
where young Issa had been to.

Characteristic of Issa visiting course
(1) Along big river side
At his era all transportation has depended upon river.
People and Load were carried by big river.
So many manufactures and markets were gathered at
near the river.
In this case, they are Tone, Edo River and Futtsu by sea.

(2) Core, sponsors.
At main point there were cores that were Issa’s sponsors,
who has helped to stay him and to supply rewards.
They had become haiku playing cores that acted as the center
where Haiku lovers gathered

(3) Active area was within 50 kilo-meters centering at Edo (Tokyo)
There was main route that was called Mito- kaidou.
Mito was 150 kilos far from Edo where Great Tycoon lived.
And satellite city to defense the northern enemy.

Autumn trip
visiting the towns
Issa and his friends waiting me 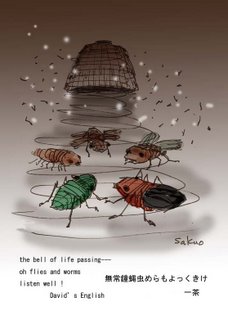 today ending too
time never come back
Posted by Unknown at 4:29 PM 1 comment: