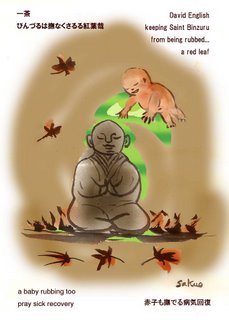 David's comment
According to Kazuhiko Maruyama, Binzuru is a Buddhist saint, one of the 16 Enlightened Ones. Folk custom dictates that if one prayerfully rubs his image, he or she will recover from illness; see Issa haiku shû (Tokyo: Iwanami Shoten, 1990; rpt. 1993) 223, note 1169. In this comic haiku, an autumn leaf has fallen onto the statue's holy head.
Sakuo Nakamura notes that Binzuru-sama is famous for his bald head, which people rub in hopes of recovering from sickness. Here, a leaf is doing the rubbing, "like a baby's palm."
visit http://cat.xula.edu/issa/
Posted by Unknown at 1:48 PM