though it's smoky
don't leave my hut!
singing plover

Who is a plover? At the time Issa’s new bride was in the hut.

She was crying her solitude, because Issa was stay at Edo from September to December 21. The plover was Issa’s new bride.

What does it mean smoky? Issa’s step mother’s family lived at the next of Issa’s house. Issa and the family had struggled for long years on father’s assets.

Both families felt smoky each others.

At Edo city Issa was thinking his young bride who was solitary at the home. 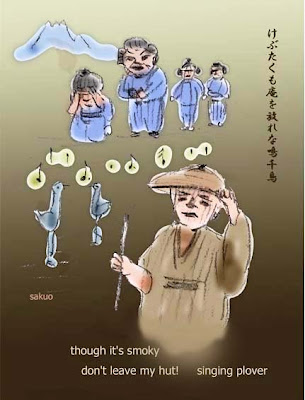 hi sakuo. A plover is a bird. I found this which may help?

your notes lend so much to our appreciation of Issa

Ashe san,thank you so much.

This Gabi's Kigo data base well explain about the plover that appeared in Issa's haiku.
I painted two small plovers in my haiga at the center of the picture.

I am glade that my note helped your understanding.
Thanks a lot.

John san,
Yes they are tiny birds.
Thank you for sharing.