as a migrant worker 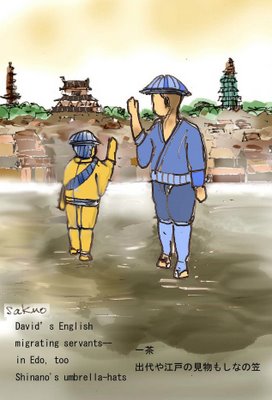 David’s comment.
In springtime, old servants were replaced by young ones. The old ones would leave their employers to return to their home villages; the young ones traveled in the opposite direction. In earlier times this took place during the Second Month; later, the Third Month.
Issa's home province was Shinano (today's Nagano Prefecture). He notices people wearing umbrella-hats from home among the throng of new servants entering Edo.

sakuo Renku and comment
Issa saw himself in old servant and young one. He came to Edo at 14 years old as the have-notes. He had made effort to become a have class.
He failed to become a master of professional Haiku-ist and retured home as have-note class.

as a migrant worker
having got old