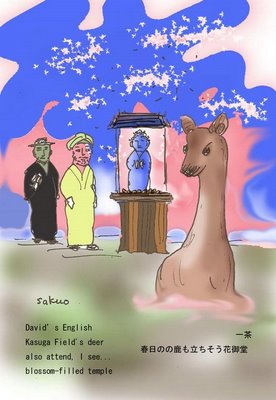 一茶
春日のの鹿も立ちそう花御堂
kasuga no no shika mo tachi so^ hana mido^
by Issa, 1810

David’s Comment
Shinji Ogawa explains, "The Kasugano (Kasuga Plain or Field), famous for its deer, is located east of Kohuku Temple and south of Tôdai Temple."Gabi Greve explains that hanamidô ("blossom temple hall") is a miniature hall set up at Buddhist temples and decorated with colorful flowers on Gautauma Buddha's birthday, celebrated on the Eighth Day of Fourth Month. Small statues of the child Buddha are decorated with flowers, and hydrangea tea is poured over the statue by visitors. Here, the deer seem to be honoring Buddha along with the human visitors. Sakuo Nakamura points out that the deer is a "servant of the Kasuga Shinto shrine," and so its attendance at Buddha's Birthday festival is like "an Arab's camel visiting a synagogue."Sakuo's observation reminds us that Issa, like most Japanese, honors both Buddhism and Shinto. His religious sentiment is vast, deep, and non-exclusive.

sakuo Renku
Preface, the deer is a servant of Shinto-shrine, Kasuga Shrine.
hanami-dou(blossom-filled temple) is Buddha’s holly house.
Judging from religious point of view they are heathen each other.
According to western commonsense, it seems to be that Arab’s camel visit a synagogue.