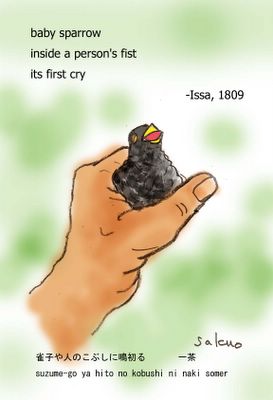 -Issa, 1809
47 years old, living Edo. On April going back to Shinano Province, where he was keeping to get acquaintance of haiku. From 1792 to 1798 he visited to the West part of Japan including Nagasaki where he got much European information.
Time to time Russian ships and British navies have come to Japan, asking to open the business. There were many uprising by the farmers in his Shinano Province.

David Comennt
Shinji Ogawa writes, "Since the word 'inside' does not appear in the original, this haiku may be translated in this way also: 'The baby sparrow starts crying at (or against, in despite of) the person's fist.' The word kobushi literally means knuckles...The expression; 'inside a fist' is rather odd."

sakuo's Imagination
Why is the baby sparrow inside a person's fist?
Soon after the sparrow's birth, he has dropped from the nest.
And he was saved by the person who looks like Great Buddha
Rescued sparrow cried at fast in the fist.
Issa though the Grace of Heaven.
Posted by Unknown at 12:22 AM