me too a offering money 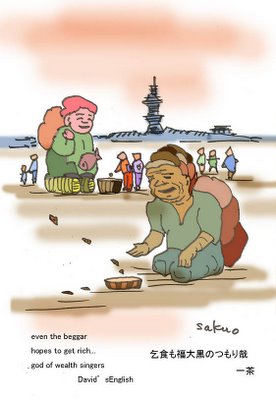 David’s English
even the beggar
hopes to get rich...
god of wealth singers

David's Comment
Daikoku is a god of wealth. In Issa's time, the daikokumai were troupes of begging musicians who performed between the 11th day of First Month and the first day of Second Month; Kogo dai jiten (Shogakukan 1983) 964. Since they were named after a god of wealth, supporting them was a way to ensure prosperity for the coming year. Here, even a beggar donates name after.

sakuo Renku
私にもぜひお賽銭を
give me too
a money offering
Posted by Unknown at 7:29 PM