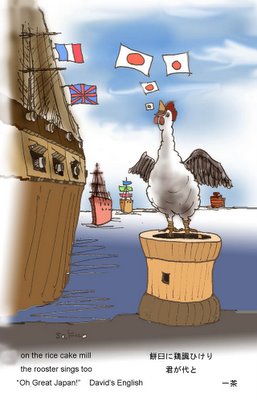 David Comment
A rewrite of a haiku of 1803. The original poem begins with "Great Japan." "Great Japan" is my translation of kimi ga yo, a phrase that refers to the emperor's reign and begins the Japanese national anthem. This is a haiku of the New Year's season, the seasonal reference being "the year's first rooster's song" (hatsu tori).

sakuo Comment
At this time many foreign ship come to Edo bay. They wanted to the supply of food and fuel. Open the free port was wanted by England, Rusian and others.
So the government had to construct fortress with canons, especially mortars that was called mill canon in Japanese, because of similarity of outlook.

saku Renku
この臼砲で江戸を守らん
with the mill canon
will defense Great Japan
Posted by Unknown at 8:20 PM