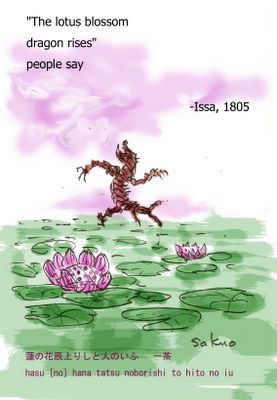 -Issa, 1805
43 years old , vivid activity at Edo with Seibi who was rich and famous amateur haikuist at that time.

David comment
Or: "someone says." Is this mysterious haiku referring to a Japanese proverb? Or is someone comparing the lotus blossom, which rises out of water, to an aquatic dragon, iridescent and spiked with horns? Other possibilities?

sakuo remark
Congratulation for the blossom of your achievement!
Posted by Unknown at 5:05 AM

Great blog! I was surfing the web to find tips on Wellness. If you are interested have a quick look at http://www.wellnessmaster.com so we can exchange ideas.