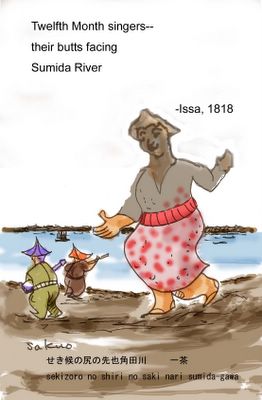 performing behind a waterfall...Twelfth Month singers

Edo's world--women also are Twelfth Month singers
Edo is the old name for Tokyo. In this large and culturally progressive city, even women participate in an activity once reserved exclusively for men

sakuo remark
Issa was surprised to see women beggers singing near the Sumida river in Edo.
Look femal Beggers sing with her hip swinging !.
Posted by Unknown at 4:31 AM

You just commented on my blog and what a neat surprise to come here and find Issa, my favorite of the old masters, along with wonderful art. I have an Issa link on my blog, but don't think it's yours. If not, I'm adding you to my links there. This is a wonderful site.