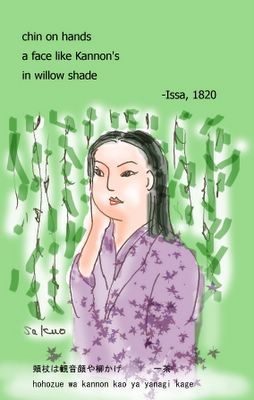 -Issa, 1820
58 years old, on October second son born. fall over and was smitten by palsy ,but lightly. wrote haiku literatures.

sakuo remark
At this time Issa himself was attacked by several disease. And He lost his wife and children in this term.
Who is Kannon like face ? Is it his children ? Or his wife, Or some one in his imagination?
I suppose it is not baby but young girl that is suggested by willow.
Who is she ??