How sad Issa was !

it's a dewdrop world 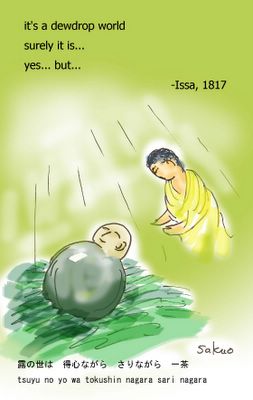 David English
it's a dewdrop worldsurely it is...yes... but...

-Issa, 1817
55 years old. married at 52 years old with Kiku, next year he get first son but soon died. From January to June stayed in Edo, and returned to Kashiwabara.

Comment
This haiku was written on the one-year anniversary of the death of Issa's firstborn child, the boy Sentarô. It has a one-word prescript: "Grieving." According to Buddhist teaching, life is as fleeting as a dewdrop and so one should not grow attached to the things of this world. Issa's response

sakuo comment
How sad Issa was !!
David san translation is good haiku that make me feel just like JapaneseIssa's original.
Posted by Unknown at 11:40 AM