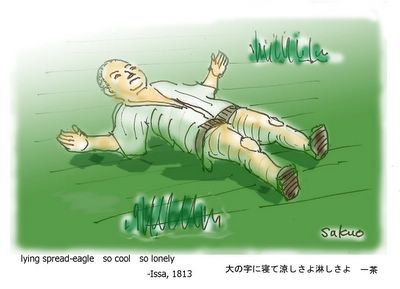 David Comment
With arms and legs spread wide, the poet's body forms the Japnese character "big" (dai no ji)--the first word in the Japanese text of this poem.

sakuo remark
Issa has done a big task. He lay for refreshment. It was cool under the green, but he felt lonely a little. Gah, I'm a little tired.

Your drawing and "Gah" I'm a little tired" comment- so funny! It made me laugh big, out loud. I like it very much. You would also be a good cartoonist with your own sense of humor and great drawing talent.