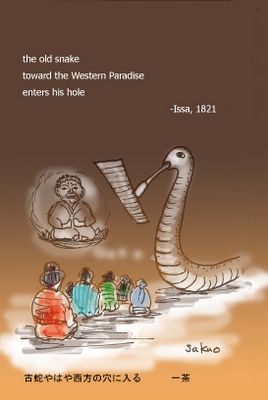 David Comment
In Pure Land Buddhism, Paradise (the Pure Land) exists somewhere in the mythic west. The snake is going the right direction for rebirth in the Pure Land.

sakuo image
Old snake is old Issa whose haiku-board has been displayed at Zenkou-Ji , the most famous Temple of Joudo Buddhist .He had many good haiku friends in Shinano province. Also he had wife , house and farm that are symbolized as snake hole.He would say that my destination has been decided to make my own style Haiku.