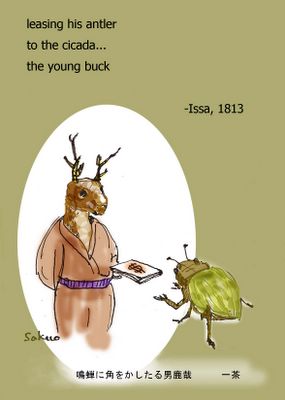 sakuo imagination
Season is autumn, cicada must retire to the backstage ,
contrary , young buck will make his stage debut in love fighting.
Now cicada must go back but he has been weak .
He did cry for help.
Cicada is Issa . His sponsor who is rich and powerful has given special aide to him. The sponsor looked like manly buck.

Issa site
Posted by Unknown at 1:31 AM