My little spring has come ! 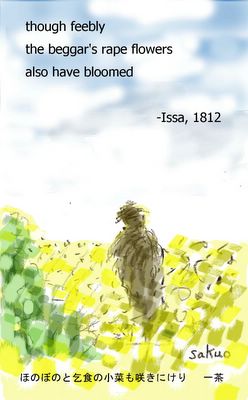 David Comment
Perhaps the "beggar" is Issa, who liked to call himself, "Shinano Province's Chief Beggar." Rape (or canola) is a bright yellow flowering plant of Asia.

sakuo imagination
Beggar would be Issa . In Edo he called himself as beggar, At this time he could have hope to return home village. So he has got peace in his mind.