Oh grassy dew, you are cold too ! 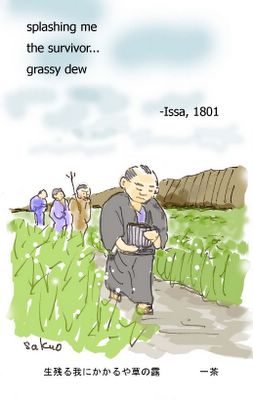 -Issa, 1801
39 years old, stay in Edo. On March coming back to his home village, he took care of his father who died on May. He wrote Hospital diary of his father that is famous "The Journal of My Father's Last Days"

David Comment
This haiku appears in Chichi no shûen nikki ("The Journal of My Father's Last Days").
It was written on the day that Issa gathered up the ashes of his cremated father.

sakuo Image
He has been carrying his father's ash on the way backing home with his half brother's family. He walked through the grassy way, the dew splashed to him, Was it cold too ?