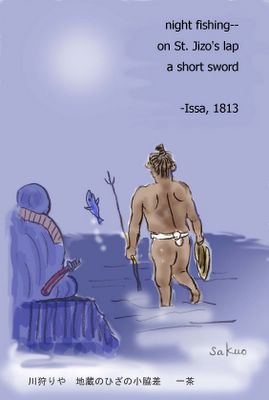 -Issa, 1813
５１ years old, On January the thirteen memorial party of his father's death , the negotiation of father's asset has finished. Many times he visited haiku friend in North Sinano. On June and July he was ill in bed for blotch
.
sakuo Japanese
夜釣りする 地蔵の膝に 短剣を
yozuri suru jizou no hiza ni tanken wo

David Comment
The fisherman, a samurai, has left his short sword on the lap of Jizô, creating an odd and poignant juxtaposition: weapon of war, bodhisattva of mercy. Jizô is the beloved guardian deity of children. See my essay, "Not Your Ordinary Saint: Jizô in the Haiku of Issa".

sakuo Remark
Samurai should not product food. He is prohibited to leave his sword away. So it was curious to see his catching fishes, putting his sword on Jizou's lap. Issa like to make ironical haiku that laugh at dominant class.
This is comical haiku as Issa's favore.