Have the baggers kids ?

they have kid maybe 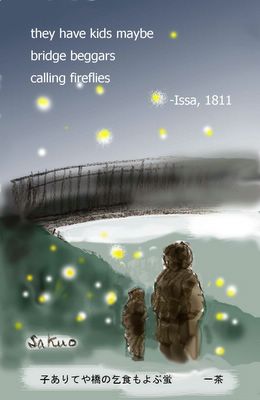 -Issa, 1811
49 years old, he lost his last teeth. Next year he will return toKasihabara. He has gotten the upper class in the haikuist ranking ofJapan.

David Comment
Shinji Ogawa explains that the ya is not a cutting word in this haiku but rather "a particle to make a conjecture." The beggars "may" have children.