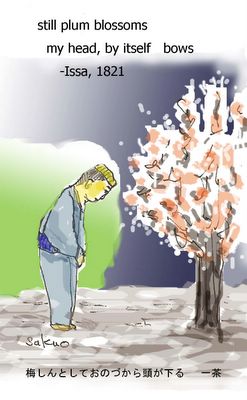 David Comment
Or: "the head."
Issa bows to the quiet, still blossoms. More accurately, "the head, by itself" is bowing without conscious intention on the part of the poet. For this reason, I first translated zu ga sagaru literally as "the head bows," rather than "my head bows." However, Shinji Ogawa believes that this must be first person, "my head." Otherwise, he writes, "the haiku loses its intensity."