lined frogs and my children 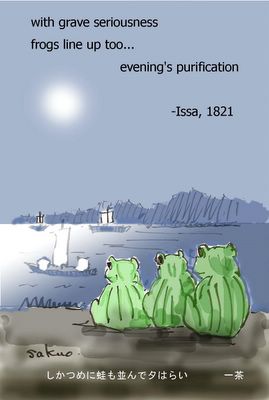 Issa 1821
59 years old. on January his second son died on his mother's back. On April his wife got sick of gout . At Zenkou-ji , the biggest Temple of Jyoudo Buddhist, his haiku board was displayed. His effort has been admitted in the area of north Sinano province.

sakuo imagination
This is serious ritual of purification . Near a shrine a paper boat is put on the water. The frogs are watching in line up.
I believe that,Issa has supposed if his three children have been alive, they would line up too and watch the boats of purification, as like the frogs are doing.

Issa site
Posted by Unknown at 1:32 AM